Soffía Björg is doing the now traditional lunch time slot at Slippbarinn. Despite the early hour, she’s in fine form and accompanied by an all star band. Maybe she should call herself that? Soffía Björg and the All Star Band? Anyway, her country songs sound wonderfully warm, especially compared to the howling wind and lashing rain outside. ‘Slow and Low’ and ‘Back and Back Again’ already sound like classics—it’s not long surely until the world wakes up to her talents.
Rebecca Sif provides a cute-sy acoustic performance at the photography museum, which is a cosy venue and should be used more often. Her songs all sound like outtakes from Disney soundtracks, all love, smiles and waterfalls.
I catch the end of Vio’s set in a clothing store, where the boys are playing workman-like indie rock whilst wearing matching florid tourist style jumpers. I’m not sure that they are suitable for re-sale though, with the amount of sweat Vio have just put into them.

By mistake, I see FURA again at Sólon, as the venues timetable seems to have gone awry. The sound is awful though—often the downside of off-venue—and the band’s gentle nuances are lost in feedback and too much bass.

French for Rabbits from New Zealand are a great little band that play delicate piano led pop songs with meaningful, heartfelt lyrics—especially on ‘The Weight Of Melted Snow’ and ‘Ghost Broken Heart’. They play in a hotel lobby in front of a fake waterfall, and to a full and appreciative audience. Tender songs are delivered alongside tales of earthquakes and the South Island, in the singers adorable accent.

Milkhouse seems like good fun, although it’s difficult to tell through the glass of a shop window, whilst Sóley doesn’t fair well against bar room chatter at Slippbarinn. These are all side shows though, with the main event of the night, possibly even the festival yet to come.

It falls to John Grant and the Icelandic Symphony Orchestra to bring some class and grandeur to proceedings. Performed in the main Eldborg auditorium in Harpa, I feel decidedly underdressed in my t-shirt and jeans. I knew I should have packed a dinner jacket.

No stranger to performing with full orchestras, John Grant has played with the Royal Northern Sinfonia and BBC Philharmonic. It’s still a surprise though when the orchestra swells behind him and creates such an epic, filmic dimension to his songs. Grant has a deep growl of a voice which projects clear and loud over the stirring strings and powerful brass, no more so than on the opening ‘Grey Tickles.’

There is an early highlight with ‘I Wanna Go To Marz’ and its twinkling piano refrain, whilst at midpoint, a stunning version of ‘Pale Green Ghosts’ is unleashed and sounds like something from a soundtrack. It leaves me breathless. The juxtaposition of the formal orchestra and the playful synths works extremely well especially during new songs ‘No More Tangles’ and ‘Disappointed.’

Fans of Grant know that he has a dark, wry sense of humor and its put to good use here, often as a device to ground himself from getting swept away with the pomp of it all. Hence ‘GMF’ and ‘Queen of Denmark’ are received with smiles and laughter.

John Grant might just be Reykjavík’s adopted son. If that’s the case, he has come home tonight and triumphed with a very special evening. The standing ovation is well deserved.

There is only one man who could compete with John Grant. His name is Father John Misty, or more accurately, Josh Tillman from the band Fleet Foxes. His album, the wonderfully titled I Love You, Honeybear, is one of the contenders for album of the year, in my opinion. Father John Misty is here to spread the word of love, sex and politics, whilst dressed in a black suit and with enough swagger to see off any contenders. 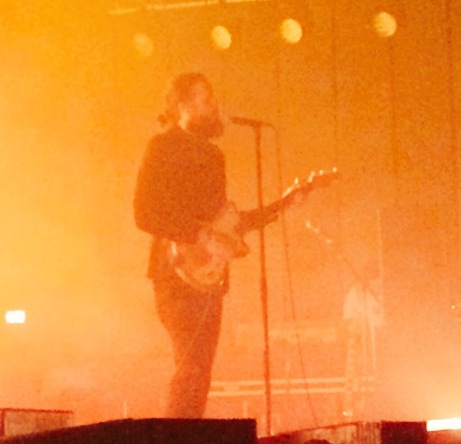 Father John starts with the title track from the album and sets the scene with his country and folk tinged Americana that feels like it should be heard in a sweltering, seedy bar on the outskirts of LA.

He is unfortunately plagued by sound problems in the first half of the set, but not until he performed the romantic and catchy ‘True Affection.’

‘Chateau Lobby #4’ sounds sexy and sublime, but what really bites is Tillman’s actions on stage which are pure theater. Hand gestures, falling to his knees, throwing guitars and writhing on the floor all lead to an enigmatic and unpredictable performance that I suggest is more staged than he would have us know.

During the dramatic ‘Bored in the USA’, Tillman confiscates a phone from an audience member and proceeds to film himself, telling her “You’ll thank me when you’ve got some actual memories of this event”.

Father John finishes with the rousing ‘Ideal Husband’. It’s difficult to know how to take Father John Misty, but when music sounds as good as this, I’ll take one of his sermons every day of the week.