So a while ago, I compiled a list of facts about Puffins. They weren’t necessarily true or accurate, but they were frequently amusing.

The list of 100 Crazy Puffin Facts has become one of the most visited pages on this blog (even Rough Guides tweeted about them today), and I still get the odd fact sent to me.

So, because I have a bit of time on my hands, I thought we could do it again. Twitter friends suggested the Icelandic sheep was fair game. Here is what we have so far. Please let me know if you have any lesser known facts about the Icelandic sheep.

Thanks to everyone that contributed. 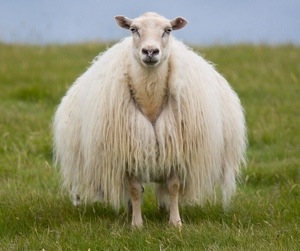 #1. Sheep have a lot of very important business in the middle of roads. You will often see them having meetings. @CatTheobald

#2. Icelandic sheep have radars in their horns so they know exactly when to run in front of your car. @IheartReykjavik

#3. Icelandic Sheep wear a peysa under their normal wool to keep warm.

#5. Sheep are directly in charge of the Icelandic weather. They make it rain a lot so as to keep their coat frizzy. @CatTheobald

#6. Icelandic sheep come in black, brown, white and the lesser seen mauve. The fleece of the mauve sheep is highly sought after.

#8. Icelandic sheep are often mistaken for pillows. You can usually see people asleep next to a sheep in Iceland. @BnGddrd

#9. Icelandic sheep are like electrons – if you remove them from a field, eventually the field collapses. @nickminers

#10. Never wear a lopapeysa when in the company of Icelandic sheep. It’s considered rude. It might be one of their relatives or friends.” Wes Jay

#11. The Blue Lagoon was originally a place where the Icelandic sheep would go to in particularly extreme weather conditions. @BnGddrd

#12. The ‘sand’ on Vik beach is actually centuries old Icelandic sheep dung. It has been proven to have medicinal properties. @BnGddrd

#13. At Iceland Airwaves Kraftwerk will be joined by the Icelandic sheep choir. Their last performance was in 1978 for the album Autobaaaaaaahn @BnGddrd

#15. Icelandic sheep have lead sheep called forystufe, who can operate GPS, and know the farmers phone number by heart.

#17. Last winter, Icelandic sheep were found alive after being buried in snow for 45 days. For this reason, they always carry a book with them.

#18. Icelandic Sheep in North Iceland take it in turns to get mistaken for visiting Polar bears.

#20. Icelandic sheep are usually placid, but will attack humans at the merest mention of Svið.

#21. Icelandic Sheep are deeply jealous of the glamorous, exciting lifestyles that they firmly believe puffins lead.

#22. Icelandic sheep have slightly longer left limbs to allow them to balance on steep hillsides. Getting this wrong can be fatal.

#23. Icelandic sheep have very good memories. They can remember at least 50 individual sheep, in addition to the entire Björk back catalogue.

#24. Icelandic sheep are known to fly when they think no one is looking. @Alliceland 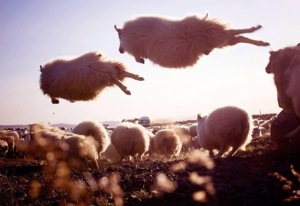 Photo courtesy of All Iceland.

#25. Icelandic sheep don’t believe ANY of the puffin ‘facts’ on your website and have lodged an official complaint. Nick Miners.

#26. Icelandic sheep are said to be able to forecast weather changes, especially those who have old high school football injuries. @guywriter

#27. Icelandic sheep are said to be able to forecast weather changes, especially those who have old high school football injuries. @guywriter

#28. Icelandic sheep are very fond of the tea cake bara brith which their Aunts in Wales post over for them once a month, via @CatTheobald

#29. Icelandic sheep are paid the same rate as human extras in Game of Thrones. @BnGddrd

#30. Icelandic sheep protested against Tom Cruise filming Oblivion in Iceland. The matter was settled only when Tom paid up 1 million ISK.

#31. Sheep display emotions, some of which can be observed the position of their ears. Icelandic sheep often get confused due to the harsh winds.

#32. Icelandic sheep change colour with every shift of the northern lights, but nobody ever notices, they’re too busy looking upwards. Via @ChloFun.

#33. Icelandic sheep are gentle creatures, and are often employed by Apple to put the plastic film on new Apple products.

#34. Icelandic sheep even the more mature ones, are excellent at playing GTA V. They are much better than Arctic Foxes.

#35. Suzy Sheep, in the popular Peppa Pig cartoon, is actually an Icelandic sheep. If you listen carefully, you’ll hear the accent.

#37. An Icelandic word for ‘sheep’ (fé) also means ‘currency’. This is why the sheep have an overinflated sense of their own worth. @NickMiners

#38. Icelandic sheep float and are often used as ballast. In fact early Icelandic ships would have 1 sheep per person incase boats sank. @BnGddrd

#39. You can buy mini lopapeysur from @IheartReykjavik – these are knitted from the fleece of the rare pygmy Icelandic sheep. @NickMiners

#40. The Of Monsters & Men song Little Talks was originally about Icelandic sheep: “Though the truth may vary this sheep will carry our bodies safe to shore” @CreagDr

#41. It is said that every part of the Icelandic sheep can be eaten. 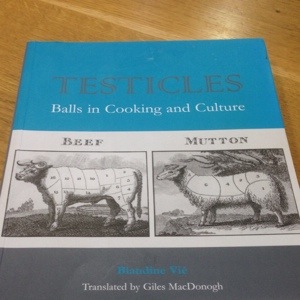 #43. Icelandic sheep can see behind themselves without turning their heads. Useful for detecting hungry Icelanders.

#45. The historic Reykjavik summit in 1986 was attended by Reagan, Gorbachev and a leading Icelandic sheep.

#46. When transported out of Iceland, Icelandic sheep retain their accents.

#47. Icelandic sheep actually protested against the cloning of sheep in the 1990′s. They were unsuccessful.

#49. All Icelandic sheep are trained in avalanche survival techniques. A certificate is required before being allowed on to mountains.

#50. A number of Icelandic sheep play in the English Premier League.