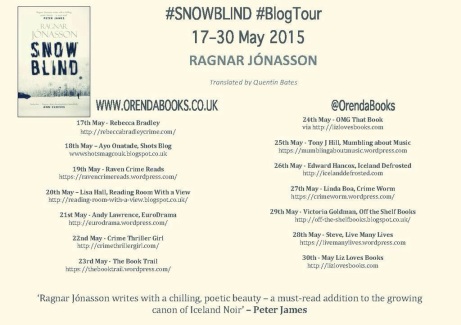 A brand new, fresh-out-of-the-box Police Officer leaves his cozy life in Reykjavik for a new world in a frozen and insular Siglufjörður in North Iceland. His arrival coincides with a series of events, including a murder and nasty, malicious assault. As the tension builds, so does the snow, leaving the characters and readers shovelling their way out of a growing atmosphere of claustrophobia.

Ragnar Jónasson’s first novel, Snowblind, is a gentle but intricate work where the location plays just as important role as the characters themselves. Siglufjörður, and especially in the winter setting described by Ragnar, seems a million miles way from urban Reykjavik. At one point, a key suspect is released on the premise that snow blocking the roads will prevent him from fleeing anyway, and additional officers from Akureyri also fail to make it to the town.

As if to emphasis this point, Ragnar himself has started to tweet photographs from Siglufjörður itself. If the combination of these photos and the descriptions of the town in the book aren’t enough to have you booking flights and a rental car, then I don’t know what is!

Snowblind is undoubtedly assisted in its English translation by Quentin Bates, himself a accomplished crime writer and virtually an Icelander himself after living their for years, Together, they make sure that Snowblind is true to its Icelandic roots – see the passage describing reading a new book at Christmas – and this adds hugely to its appeal.

Ragnar was kind enough to answer a few questions for me.

Your latest novel – Snowblind – was released in English on in April. Congratulations on this. What’s it all about?

Snowblind is the first book in a series, called Dark Iceland, set in Northern-Iceland, mainly in and around the small town of Siglufjörður. Ari Thór Arason is a rookie policeman on his first posting, in Siglufjörður, and when a young woman is found lying half-naked in the snow, bleeding and unconscious, and a highly esteemed, elderly writer falls to his death in the local theatre, Ari is dragged straight into the heart of a community where he can trust no one. An avalanche and unremitting snowstorms close the only road into town, and the winter darkness threatens to push Ari over the edge.

How important is Iceland and Siglufjörður as a setting for your work and the Dark Iceland series?

Siglufjörður is the town where my father grew up and where my grandparents lived. We visited Siglufjörður every summer when I was growing up and I still go there as often as I can. My grandfather wrote about the history of Siglufjörður and so when I needed a setting for my series it was really the obvious option. Also, it is a town very fitting for a crime novel – it is very isolated, only accessible via mountain tunnels, and with extreme darkness and snow in winter and very long and bright nights in the summertime. But needless to say, in real life it is a very peaceful town!

You have previously translated fourteen Agatha Christie novels into Icelandic. Did you learn anything about crime writing by doing this?

Translating Christie’s books certainly taught me a lot about the construction of a crime novel. I also hope I’ve learnt something from her in terms of plotting and setting. She was the master of clever plots, and I really admire that quality. Therefore my aim is always to have a surprising twist at the end of my books. Also, she was brilliant at creating atmosphere and using setting to her benefit – the Orient Express, the Nile, country cottages etc. To me, Siglufjörður is almost like a central character in the books. Also it’s important to me that Siglufjörður is a real place, which readers can visit. I’ve also set books in other areas of the north, such as Héðinsfjörður, an uninhabited fjord, and Kálfshamarsvík, a beautiful and remote place where there used to be a village – all these places have been important to the booksIt is very hard to say exactly why “Nordic Noir” has been so popular abroad. I think that the setting plays a part, and perhaps the climate as well – the cold winters. But also there have been marvelous writers paving the way, like Stieg Larsson and Jo Nesbo, and also Icelandic writers such as Arnaldur Indriðason and Yrsa Sigurðardóttir.

You are a co-founder of Iceland Noir. How did this come about? Will it be back next year?

Iceland Noir was an idea myself and two of my colleagues, Yrsa Sigurðardóttir and Quentin Bates, had in the spring of 2013. We met at a crime festival in Bristol and decided to set up a small and friendly crime festival in Reykjavik to draw attention to Icelandic crime fiction. People thought we would take at least a year to prepare, but the first festival was held a few months later, in November 2013, largely thanks to international bestselling author Ann Cleeves, who was the first author to say yes to taking part – and with a big name author like her it proved easier to make the festival happen. We repeated it in 2014, on a slightly larger scale, but sticking to the venue of the Nordic House, a perfect setting for such a festival. In 2013, we promised Ann Cleeves that we would support a festival in Shetland Noir in 2015 rather than hosting our own, as Shetland is the setting for one of her series – so Shetland Noir will be held in November 2015 in partnership with Iceland Noir. But Iceland Noir will be back in Reykjavik in November 2016.

Iceland is actually a relatively safe place to live with an extremely low murder rate. Isn’t this a bit of a problem for you as a crime writer?

It’s hard to say that a low crime rate is “a problem”, but it does pose some challenges to crime writers. It’s important, I think, to make the stories realistic, so one sometimes needs to be creative and look beneath the surface for the social problems and crimes which are not always obvious.

You are a lawyer in Reykjavik when not busy writing. Do you draw on your work for inspiration?

I have very consciously tried not to write about the law or lawyers. I think there is one lawyer in Snowblind, mostly out of necessity because the victim had an interesting will drawn up – but apart from that I want to write about something else, to keep the necessary distance between my work as a lawyer and my writing.

What’s next for the Dark Iceland series?

I have now written five books in the Dark Iceland series. Two of them are more or less only based in Siglufjörður and the rights to those two books have been sold to the UK, so Snowblind will be followed up by Nightblind in English in 2016 (both books translated by the brilliant crime writer Quentin Bates, who himself is an author of series set in Iceland). I wouldn’t be surprised if the lead character of the Dark Iceland series would return in the sixth book, but for the moment I am working on a very different crime story.

Snowblind is out now, and available from Orenda books.