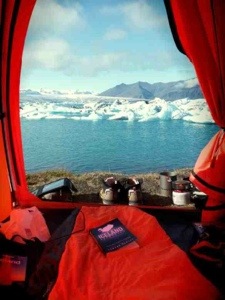 Remember Geoff Harper, the chap cycling from Höfn to Reykjavík via beaches alone? He has done it, and there is a full report here.

My original article with Geoff:
I admit it; most of my travels around Iceland haven’t been that strenuous. I’ve seen quite a bit of the country, but quite a bit of that was through the bottom of a bottle or with a knife and fork in hand.

I’m not ashamed of it, but I was intrigued to hear about Geoff Harper, another Brit (although he now lives in the States) who has an obsession with Iceland, albeit from a more active perspective. Geoff has come up with ‘Unchained Iceland.’ I wanted to find out more.

What is ‘Unchained Iceland’?

Unchained Iceland is a five hundred mile traverse of Iceland’s southern beaches from Höfn to Reykjavík on my Fatbike. Whilst many riders have circumnavigated Iceland via the Ring Road this trip is, as far as I know, unique. I will be camping along the route and stopping only in towns to buy food and supplies.

Can you cycle all the way from Höfn to Reykjavík on the beach, or are there areas where this won’t be possible?

Yes and no! The beaches are in a constant state of flux, ocean inlets vary with tides, glacial runoffs vary with ambient temperatures, and also rain and high winds will all affect my ability to ride the beaches at any given moment. Detailed topographical maps of Iceland are hard to find, with seven people per square mile demand is low. The maps I have all show differing characteristics of the coast so not much help there! I have contacted a search and rescue organization to see which maps they use and have also spoken with cyclists who have ridden the road by the southern beaches all of whom have suggested that it is doable, albeit ambitious.

Simply put, I will ride what is ride-able and the rest I will portage around, accordingly I expect to make up the large majority of the route on the fly.

What on earth is a ‘Fatbike’?

Fatbikes originate in Alaska where more than a decade ago they were improvised from mountain bikes for the purpose of winter racing on snow.

In recent years fatbikes have evolved, often replacing traditional mountain bikes where die hard riders use them year round to access backcountry terrain. These bikes are effectively the monster trucks of the bicycling world with 4inch-width tires supporting a relatively light bike frame, they cruise over sand and snow that would stop regular bikes in their tracks. The fatbike I am using for my adventure is designed specifically for beach riding, instead of a conventional chain it has a belt-drive made by Gates Carbon Drive which is impervious to salt, sand and rust.

Tell us a bit about yourself, and your relationship to Iceland.

Originally born in Surrey, England, I moved to the U.S. in 1999 living mostly on the West Coast. I currently live in Denver, Colorado which is where I discovered fatbiking. Colorado is hands-down my favorite state, I get outside and enjoy the natural beauty of the Rocky Mountains as part of my routine.

Regarding Iceland, since the age of 13 I have been hearing stories about the northern lights, glaciers, dark winters and light summers mostly because one of my best friends is actually an Icelander from Reykjavík. I have a passion for Icelandic music both Sigur Rós and Múm have been favorites of mine for over ten years and also the Icelandic Sagas are very interesting to me, it’s powerful stuff!

What if it all goes wrong? What are your worst fears?

My worst fears pertain to mechanical failure of the bike and mechanical failure of myself, i.e. injury. I am preparing for both of these by planning and training, though in reality there will be moments along the trip where I am more vulnerable than others, these moments tend to define my adventures so I try to embrace them as such.

Gates carbon drive will be featuring me on their blog/Facebook/twitter. I will be blogging and posting photos on my own site also.

I’ll catch up with Geoff again after his challenge. As tempting as a fatbike sounds, I’ll still be taking thing easy. I wish Geoff the best of luck though.