I don’t know if it was part of the marketing package, but having the audience stand outside the venue in the freezing cold was either one way of setting the mood, or testing their resolve to see Chasing Ice. With teeth chattering and a cup of coffee used as a hand-warmer, I settle down to watch Chasing Ice.

Chasing Ice is a documentary produced by James Balog, a scientist/photographer and former sceptic of global warming, who has decided that now is the time to document the retreat and disappearance of glaciers across the northern hemisphere, with a view to providing tangible, photographic evidence of climate change taking place before our very eyes.

To do this, James and his crew (more on them later) set up Extreme Ice Survey (EIS), essentially 25 time-lapse cameras recording the movement of glaciers in Alaska, the state of Washington, Greenland and Iceland. What follows is the story of EIS, the trials and tribulations of setting up such a far-reaching project and the breath-taking, awe-inspiring results.

There are a couple of highlights to watch out for; the first is Svavar Jónatansson, an Icelander who guides Balog in the Iceland part of the mission. The film starts and ends at Jökulsárlón in Southeast Iceland, amidst the frozen chunks of translucent blue ice on the black sands. The shots here are exactly as you would expect; the shining shoes of Iceland’s best party outfit.

Balog places five cameras on Sólheimajökull, which ultimately show the glacier ‘dying’, as Balog puts it. It’s here, checking one of cameras, that Svavar inserts a much needed slice of humor. Picking up a camera unit smashed by falling rocks and ice from the glacier itself, he says “looks like they didn’t read our signs” and points to a warning sign on the obliterated box itself.

There are some mawkish moments; Balog and his damaged knee; dressing his children up in expedition gear… The science pieces, the talking heads and the constant barrage of bad news clips culled from around the world are occasionally annoying, occasionally unsettling but a constant distraction from the main star of the show; the ice.

Balog is an extraordinary photographer; the ice is photographed at such delicious angles and perspectives that it makes me shudder and grasp my coffee even tighter. Shots of gaping moulins, striped glaciers from above, striated blue/black ice, micro trapped air bubbles and icebergs against the night sky, backlit by aurora fizzle and cracks on the screen.

The finale is a calving event in Greenland, when an entire glacier seems to buckle and explode in front of the cameras. The ice is the real star of the film, and in a way, exactly what Balog has set out to capture.

Whether a single film has the power to influence thinking and politics behind global climate change remains to be seen, but this is powerful stuff. The star of the show is on the verge of bowing out forever. 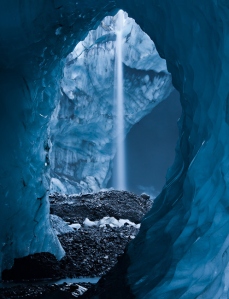